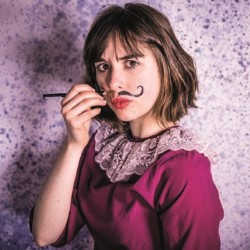 Emma Bentley discusses her decision to write a ‘solo Shakespeare feminist play’ and some of the issues that newly trained young women actors face in 2015.

“’Frailty thy name is woman?! Oh get stuffed Will!’ Armed with her record player, a fake moustache, some rudimentary feminism and a lot of questions, Emma sets out to find out exactly why she can’t play Hamlet. Or Macbeth. Or Iago. Or even just a downright Fool. And not just on stage but in real life! Emma Bentley dons the trousers in her debut solo show tackling the trials and tribulations of playing Shakespeare’s men … without a codpiece.”

This entry was posted on Friday, August 28th, 2015 at 8:32 pm and is filed under Edinburgh Fringe 2015, Kate Saffin. You can follow any responses to this entry through the RSS 2.0 feed. Both comments and pings are currently closed.