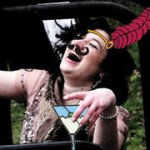 In an update interview with Amy Curtis from Trailblaze Theatre, Amy talks about how the show has developed since Brighton Fringe 2012 (first interview here) and in the challenges of bringing a cabaret performance space to life for their production of A Dirty Martini.

Interview 22nd August 2012: Listen to our interview with Amy Curtis

This entry was posted on Monday, August 20th, 2012 at 12:56 pm and is filed under Audio Interviews, Edinburgh Fringe 2012. You can follow any responses to this entry through the RSS 2.0 feed. Both comments and pings are currently closed.