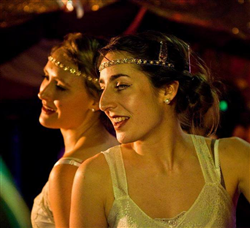 “The 1920s. The gods of ancient Greece spend their nights in Aphrodites’ boudoir, looking for entertainment by playing with the lives of mortals. Have they bitten off more than they can chew as they meddle with a headstrong Ariadne, a courageous Theseus and a Minotaur that needs defeating?” Jesse Du Pre talks to Paul Levy about Hideout, an award-winning production from Haste Theatre.

Listen to our interview with Jesse Du Pre about The Hideout

This entry was posted on Tuesday, May 5th, 2015 at 8:05 am and is filed under Audio Interviews, Brighton Fringe 2015. You can follow any responses to this entry through the RSS 2.0 feed. Both comments and pings are currently closed.