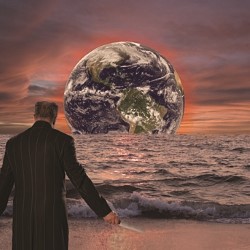 Crusoe is back at the Fringe after a highly recommended review from FringeReview for Gavin Robertson‘s solo work two years ago. “Robertson returns after last year’s solo hit, Bond! Following performances in the USA, Europe and Australia, this unique, darkly comic show creates an urban cinematic world where a hitman, a middle-aged white male and an Alzheimer’s sufferer share their stories, thoughts and mishaps about being alone, cunningly interwoven with an exploration of Big Bang theory! A tight blend of precise movement and bold images, supported by an original atmospheric soundtrack.” In this interview, he talks about the importance of solo theatre in his work, how he makes it, and how he deals with the “solo” aspect. A fascinating insight into theatre craft.

Listen to our interview with Gavin Robertson about Crusoe

This entry was posted on Wednesday, August 12th, 2015 at 12:57 pm and is filed under Audio Interviews, Edinburgh Fringe 2015. You can follow any responses to this entry through the RSS 2.0 feed. Both comments and pings are currently closed.