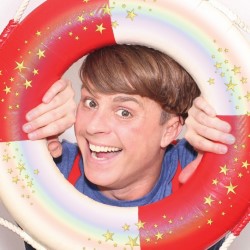 Paul Levy talks to Peter Michael Marino about Late with Lance! How do you create a new character? Where is the line between character comedy and theatre? “From the creator of the global smash Desperately Seeking the Exit comes Lance – a delusionally optimistic cruise ship entertainer. This pathological musical theatre fanatic and celebrity stalker is docked in town, so he’s hosting his own twisted, musical variety chat show. Featuring Lance’s original songs, clever dances, and witty rapport with his special scheduled guests Liza Minnelli, Hugh Jackman and Miami Sound Machine. Lance has suffered for his art. Now it’s your turn.”

This entry was posted on Tuesday, August 25th, 2015 at 11:38 am and is filed under Audio Interviews, Edinburgh Fringe 2015, Paul Levy. You can follow any responses to this entry through the RSS 2.0 feed. Both comments and pings are currently closed.