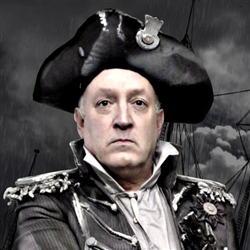 “In the shot and smoke of battle 4 crew aboard HMS Victory strive to destroy the Combined Fleet of France and Spain. For 200 years since then Vice Admiral Horatio Nelson has stood patiently on his column in Trafalgar Square watching the world change… A well researched, cleverly woven tale of our brave, inspirational but flawed British hero told by a cast of characters – all ingeniously played by Nick Collett!” In this interview, Paul Levy talks to Nick about creating this solo show, Nelson: The Sailors Story, the research that went into it, and his plans for for sailing it into the future.